Police on routine patrol made an arrest after spotting a man yelling and throwing garbage at another man exiting a parking lot in the area of 28th Street and Second Avenue West.

The driver of the vehicle reported the suspect threw a lit cigarette at him during the altercation.

Upon further investigation, police located a knife on the man’s person. A 37-year-old man is facing charges in connection with this incident, including breach of court order. 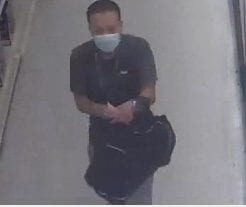 Police are asking for the public’s assistance in identifying the person responsible for the theft of numerous hockey cards from a local business over the weekend. The incident happened Saturday.

Surveillance footage of the suspect is attached. Anyone with information is asked to contact Prince Albert Police at 306-953-4222 or Crime Stoppers at 1-800-222-TIPS.

Police were called to a residence in the 500 Block of 10th Street East Saturday afternoon for a report of a man with a gun. Members responded and located one man in possession of cocaine.

He has been charged with possession of a controlled substance and breach of court order. [991133847]

No firearm was located at the scene.