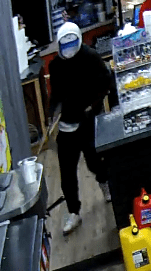 Police are investigating two armed robberies at convenience stores in the city in recent days, and believe the incidents may be linked.

Officers on Patrol responded to a report of a robbery at a business in the 2700 Block of 15th Avenue East just after 1 a.m. Wednesday morning. A man entered the store holding a knife and fled with an undisclosed amount of cash and lottery tickets. The suspect in this file is described as wearing a blue and white hat, white shoes, light-coloured bunnyhug and black jacket, and black pants. (PAPS File 2022-18640)

On Tuesday, just before 11:30 a.m., officers on Patrol responded to a call for service involving a robbery at a business in the 1900 Block of Central Avenue. One man threatened staff with a knife while demanding money and lottery tickets. The man then fled Eastbound on foot. The suspect in this file is described as being 5’8” tall and approximately 150 pounds. He was wearing a black bunnyhug with a fish skeleton outlined on the back, black pants, white Adidas shoes, a blue and white hat and a white medical mask. (PAPS File 2022-18537)

No one was injured in either incident.

Due to the potential connection between these two incidents, police are warning the public and businesses to be cautious and stay alert. Staff are recommended to work in pairs and ensure store visibility by keeping the interior and entries well lighted. Report any suspicious activity to police.

Anyone with information on the identity of the man seen in the attached photo is asked to contact police at 306-953-4222 or anonymously through Crime Stoppers at 1-800-222-TIPS. Tips can also be submitted anonymously online at https://www.p3tips.com/248